A downloadable game for Windows

Welcome to WHITE WORLD as an initiate hoping to rise to the mighty rank of Wizard of the 12th Order you must travel to a white world and survive there for some period of time. Frankly it’s quite possible (even likely) there is no way out, which is probably why there are so few Wizards of the 12th order around.

White Worlds exist in the outer reaches of some place or other, no one knows why they are as they are, that being frozen little balls dotted with occasional trees and ruins. Some point to the ruins as evidence they were once inhabited by now lost civilisations, the zombies would certainly seem to support that hypothesis. Although they have more of a not quite finished feel about them, rather than a long since abandoned.

Comfort/Mana/Food and Health to maintain

Selection of magical spells in a rather lovely spell book

ZOMBIES (Yeah but these these are snow/ice and worse zombies)

Various locations to discover in the world

Super awesome bag of holding to store all your stuff

Terrifying bugs! I mean the software kind not actual bugs.

Open your spell book with the menu button.

Icons that can be used in the spell book will glow blue when you touch them with your index finger. To activate the icon press the trigger (use) button when the icon glows.

To turn the page use the transparent box icons in the lower left and right corners.

The first page functions as a main menu of sorts. Currently with the option to start a new game (this may or may not work once you’re already in a game).

The second page is your status page, this will show any affects currently applied to you as well as the rough time of day and number of hours/days survived.

The third page shows the contents of your bag of holding. The items that is marked with ** is the “top” item, the one you will retrieve if you put your hand to the bag and press the grab button. You can select a different “top” item by using the arrows icons on the right.

The fourth and fifth pages contain spells. Casting spells is a 2 stage process

To create the “spell spark” use the C icon listed with the spell. You will get a glowing effect on your finger with a trail, or a red spell failed effect if you don’t have enough mana to begin the casting.

Press the use button to release the spell spark and begin the second phase of casting. A casting circle will appear below the spark and 1 or more casting nodes around it. The 3 nodes currently implemented are

Cast (directly above the spark) this node complete the spell casting and produces the finished spell. It costs no additional mana, but it may fail if the spell required charging or ingredients which weren’t added.

Charge (to the right) this node uses mana to increase the effect of the spell, either duration (haste/wizards fire) or charges (wizards bolt). Depending on the spell you may be able to use this node multiple times.

To add a spark touch it with your index finger, hold the trigger (use) and move it to the central spark where it will automatically be added and any mana cost taken. You can add ingredients from you bag to the central spark to if required (for example to set the type of Wall or Shelter)

Note if you add the wrong node or ingredient, or you attempt to add a node but don’t have enough mana the spell may fail.

This is the result of a 1 week personal game dev challenge to build a game in a week, which i totally achieved in just 4 short weeks. At least I managed to produce this, if you call that an achievement. The game is built on a framework I've been building up in Unity for a couple of years for a larger project, the main feature of which is the ability to generate full solar systems and planets right down to the surface.

White World is the first attempt to actually finish out something resembling a game using the framework and while the world is vastly smaller than the framework was built for I think the result is not bad.

As this was built as a fun challenge its future development is uncertain. Currently it's a prototype to test and help me develop my framework. There are a few important features which I haven't managed to get finished by my (latest) deadline but I will certainly add. Save/Load being the most important. I've also got a list of spells I'd like to implement and to flesh out the refuge (base) building mechanics somewhat. Vehicles of some sort (which are supported in the framework) might be fun to try and of course more enemies, locations, better planet scatter generation, more of... well everything. How much of that gets done will depend very much on how much folks enjoy the prototype and want to see more.

THIS IS A VR GAME FOR HTC VIVE AND OTHER HEADSETS. IT HAS ONLY BEEN TESTED ON THE VIVE SO FAR.

Just unzip to somewhere and run it. 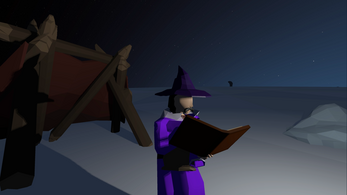 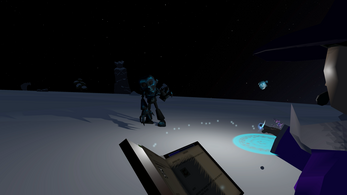 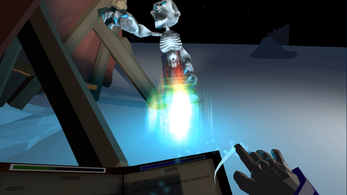 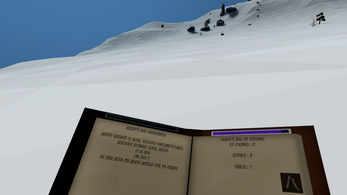 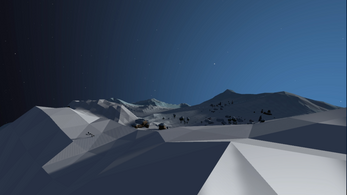 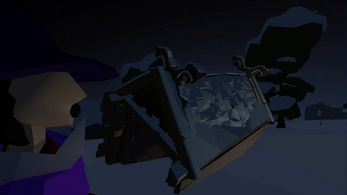